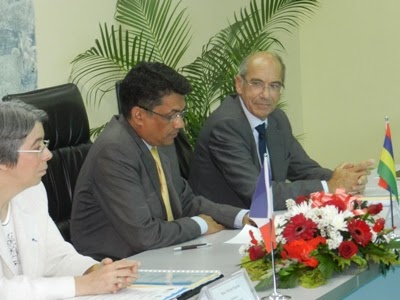 Posted by Rajesh Jeetah at 4:20 PM No comments: Links to this post

Speech - ‘Seminar Academia – Industry Interaction on International Institute of Technology Research Academy (IITRA) ‘
Thursday, 9 October 2014-  Time: 13:00 hrs
I am pleased to address you at this seminar on the interaction between the IIT Research Academy of Mauritius and industry.
As you are aware, the setting up of an IIT like institution in Mauritius in close collaboration with the prestigious Indian Institute of Technology (IIT) Delhi is the first of its kind outside India. The IIT’s are institutions of international reputation with high standards of education and research.
Classified as institutions of national importance in India, they have produced distinguished scientists and inventors. Three of them, including IIT Delhi ranked among the top 300 higher education institutions worldwide in the QS World University Rankings .
The IIT Delhi itself which started in 1959 offers numerous undergraduate and postgraduate programs in various scientific and engineering areas, and operates 11 Inter-Disciplinary Centres and 3 Schools of Excellence.
We have every reason to be proud of the setting up of an IIT like institution in Mauritius, one of the most important achievements in the field of higher education. It is important to know that the setting up an IIT like institution was not an easy process. This project has come to realisation after many unsuccessful attempts over several years and after intensive negotiations with the Indian authorities. In fact, this is the first time that an IIT like institution is being established outside India with the authorisation of the IIT Council and the Government of India.

The objective of this institution is to promote scientific excellence and foster technology development in Mauritius by setting up state of the art scientific and technical researchfacilities, to generate new cutting-edge knowledge into practice.The IIT Research Academy isstarting its activities in November 2014, with the recruitment of students andhigh level faculty members- all of them with PhD’s and solid research experience.
During the first two years, the institution will be offeringMasters and PhD programmes in the field ofComputer Science & Engineering and Electrical & Electronic Engineering. Professor Ishtiaque, the Executive Director of the IIT Research Academy will provide more details on the areas of research and programmes of studies.

It is also important to know that IIT Delhi has appointed Prof Ishtiaque, a former professor of the IIT Delhi as the Executive Director of the IIT Research Academy. The implementation of this project is being overseen by a Steering Committee which includes Prof Shevgaonkar, Director of IIT Delhi and Prof S. Koul, Deputy Director.

This gives  us the confidence that the IIT Research Academy will be set along the lines of the IIT Delhi and that there would be no compromise whatsoever on standards and quality of the education and research .

Let me also inform you that the selection of candidates will be carried out by IIT Delhi and all qualifications – Masters and PhD – will be awarded by the IIT Delhi. The curriculum and courses and all academic matters will all be approved by the IIT Delhi.In fact, the institution which is operating temporarily under the aegis of the Mauritius Research Council is expected to evolve into a full-fledged international institute. Adraft IIT legislation is under preparation to give the institution full awarding powers and autonomy.

This IIT Research Academy is expected to become a leading research institution in the fields of Science and Engineering. Another aspect that I would like to highlight is that IIT’s have their own ethos and culture – based on innovation and out of the box thinking and a strong sense of professionalism.
It is therefore very crucial for industry partners to actively participate and collaborate with theinstitution to develop the industry oriented education and research activities at the IIT Research Academy Mauritius.
Mauritius is aspiring tomove into the category of high-income status countries. According to figures released on 18th July 2014 by the World Intellectual Property Organization, Mauritius is ranked first among 33 countries of Sub-Saharan Africa on the Global Innovation Index (GII) 2014 – notable in this year’s rankings. The greatest strength of Mauritius is its institutions, where it performs above the average score of the high-income economies.
It needs to upgrade its human capital, particularly in science and technology. Achieving sustained national development lies through the development of a new scientific and technological culture, built around quality-oriented and collaborative partnerships with world class institutions.
This meeting with the key economic sectors is meant to be a starting point for a continuous dialogue and interaction between industry and the IIT Research Academy. In order to make industry and academic linkages a standard feature in all universities, Government has made it mandatory for all public universities to establish consultative committees chaired by a private sector representative. Government has also allocated Rs 100M for collaborative research grants with private sector operators.
In addition to this provision, universities and academia can consider other means of interactions such as
Ø forming and accessing networks and stimulating social interaction;
Ø influencing the direction of research processes among users and suppliers of technology and fundamental researchers;
Ø meetings andconferences;
Ø hosting standard-setting forums;
Ø establishingentrepreneurship centres;
Ø contract research or  cooperative research with industry,
Ø providing access to specialised instrumentation and equipment,
Ø  incubation services,
Ø promoting alumni networks ; and
Ø personnel exchanges (internships, faculty exchanges,etc) as well as joint industry-academia visiting committeesand collaboration on curriculum development.
The IIT Research Academy being a new institution with a high level of ambition to promote research and innovation provides new avenues to industry.
I take this opportunity to invite the private sector representatives present here to form part of the consultative committee of the IIT Research Academy and develop a formal IITRA - industry association as from today.
Thank you
Posted by Rajesh Jeetah at 12:42 PM No comments: Links to this post