·       The Chairperson and Members of the Board of Governors of the University of Technology, Mauritius;


A very good morning to all of you.


I am honored to be present for the opening ceremony of the Training Workshop in Marine Renewable Energy which is the first of its kind in Mauritius.


I also wish to congratulate the University of Technology, Mauritius and the Centre of Applied Research in Sustainable Development for this initiative.

Allow me to welcome Professor John Ringwood who has especially made this trip to Mauritius to share his knowledge and expertise in the field of Marine Renewable Energy.

Well, as all of you know, it is the vision of the Prime Minister, the Honorable Dr. Navinchandra Ramgoolam to make Mauritius become a model of sustainable development.


As such, in 2013, the Government of Mauritius came forward with the Ocean Economy Roadmap, which provides a framework for the sustainable management and exploitation of the Exclusive Economic Zone (EEZ) of Mauritius. Mauritius has an EEZ of 2.3 million square km, which has great potential of becoming an economic pillar in the coming years.
The roadmap is based on seven clusters comprising of various projects that aim at attracting foreign joint ventures to be implemented over specific time periods.  One of these clusters is to exploit renewable energy from the ocean. The target is to decrease the dependency of Mauritius on fossil fuels by the generation of about 35% of our electricity through the ocean.


It is in the same perspective, that today the Centre for Applied Research on Sustainable Development has come forward to contribute towards disseminating appropriate skills and knowledge on Marine Renewable Energy and the Ocean Economy of Mauritius. Undoubtedly, this project will definitely help the Island of Mauritius towards achieving sustainable development.  As re-iterated by the Honorable Prime Minister, the Government is here to provide necessary support towards harnessing the wealth of our ocean.


Moreover, my Ministry has on-going initiatives towards fulfilling the ocean economy road map mostly through the inculcation and propagation of knowledge in the ocean sector.


Hence, it is a matter of pride today to see that the University of Technology, Mauritius is taking the lead in disseminating a training workshop in collaboration with the Centre for Ocean Energy Research, National University of Ireland together with esteemed institutions and Ministries of Mauritius. This Marine Renewable Energy workshop represents a primordial step towards the promotion of the Ocean Economy Roadmap.


I have been through the topics to be discussed and I am sure that the participants of the training workshops will enhance their skills and knowledge.


I encourage the Centre for Applied Research in Sustainable Development to organize more similar workshops in the fields of sustainable development thus helping towards the vision of having a Sustainable Mauritius Island.


On this note Ladies and Gentlemen, I declare this training workshop open.

Posted by Rajesh Jeetah at 4:40 PM No comments: Links to this post


First of all, let me welcome you all and in particular the 42 participants from overseas. I am told 16 countries are represented here.


I would like to commend the organisersfor taking the initiative to organise this meeting: the Centre for Biomedical and Biomaterials Research in Mauritius and the EcoleNationaleSuperieure de Chimie de Montpellier through Dr Michel Wong Chi Man.


Dr Wong Chi Man was bornin Mauritius and completed his secondary studies here. I wish to express my thanks to him for sharing with us his experience after a successful career in France. We thank you all, Ladies and Gentlemen for coming from Europe, Japan, USA and many other places to share your research findings in this emerging field of nanotechnology.


I am informed that the objectives of this conference are to:


·       To take stock of research in the field of nanotechnology with regards to energy, environment and health applications. I am particularly satisfied that those topics are in line with needs of Mauritius.


·       To consolidate networking in the field of nanotechnology research and promoting north-south research collaboration.


·       To initiate the establishment of an integrated interdisciplinary education and training program in nanotechnology for Mauritius and the region;


These are what we would like to see not only in nanotechnology but also in other areas.


The Government of Mauritius has recognised that investment in scientific and engineering research now provides the means by which an economic upturn can be created and sustained in the medium to long term. In promoting Mauritius as a sustainable island (Maurice Ile Durable), the Government has given a strong direction on how to address  challenges ahead namely : energy-climate-environmental issues; food security and the sustainable exploitation of our natural and agricultural resources; health issues; challenges of maintaining competitiveness in traditional sectors (sugar, marine, textile, light industries) and the need to encourage the emergence of new high-tech industries (biotechnology, clinical research, pharmaceuticals, software applications). It is fully recognized that Science, Research and Technology will underpin all these challenges.


The Ministry of Tertiary Education, Science, Research and Technology was created in 2010 precisely to address those challenges, a sine-qua-non for the emergence of an innovation-driven economy. Over the past four years, my Ministry has spared no effort to promote world class research, in areas of strategic importance and strength for the mauritian economy.


A number of measures and incentives have been put in place to encourage investment in research and innovation. To cite a few, we have established since 2011 the best Mauritian scientist award, an award which recognizes research excellence.


We have instituted National Research Chair positions and presently have two of them.


We have regular business angels meetings to foster innovative projects. This year we have set up a Collaborative Research Innovation Grant to enable enterprises develop research and innovation through joint ventures with our researchers.


We are putting up a number of specialized research centres throughout the country. This Conference comes at a very opportune time as we laid the foundation stone only last week of a building which will house a Centre for Nanotechnology.


Mauritius is small country and in spite of all our commitments and efforts, we cannot match the billions that others devote to research. Given our limited resources, we have to concentrate them where it counts. Universities and public research institutions have to figure out what their mission is, set priorities, and play to their strengths. Research funding has to be tied to research performance. The equation is so to say a simple one: we need to do better with less.


We need research in the field of nanotechnology to address issues such as sustainable energy production, environmental monitoring and remediation, water purification and desalination, diagnostics and therapies and probably many others.


It is a matter of pride for us that researchers at the CBBR are doing well in the area of nanomedicine as you will note from the presentations and posters during this meeting. I note also with great satisfaction that a session has been devoted to educational aspects of nanotechnology. I have myself been pushing for the establishment of an undergraduate Nanotechnology course which should start shortly. We rely on your guidance and request your support to consolidate this first programme. Perhaps we can also think of a Postgraduate programme with your support.


To conclude I would like to reiterate that we need to grow research, to invest in capacity building, to reinforce networks, to join hands with the private sector. This Conference will no doubt add to our efforts in the emergence of nanotechnology in Mauritius both at the research level and industrial development that could be beneficial to pour economy.


With these words, Ladies and Gentlemen, I declare this International Conference on NanoMaterials open and I hope you enjoy the presentations and discussions. I am informed an excursion has been organized on Wednesday which will take you through our tea route. I hope you enjoy it as well and wish you all a very pleasant stay in Mauritius. 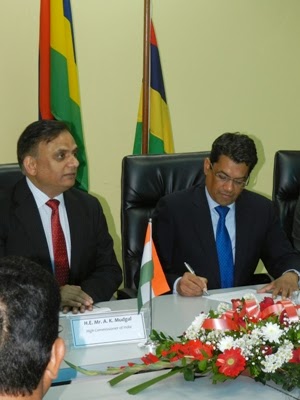 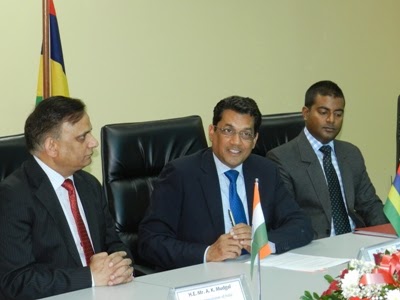 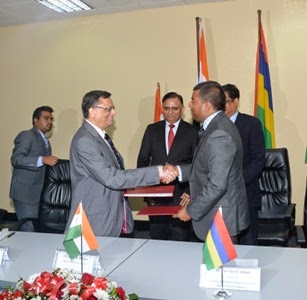 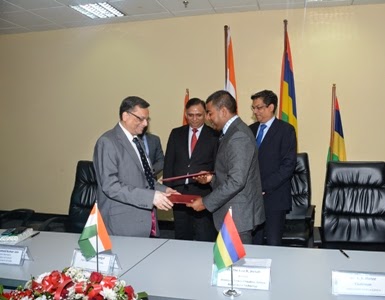 Thank you all for being present here this morning, for the signing ceremony of the Addendum to the Memorandum of Understanding between Rajiv Gandhi Science Centre and the National Council of Science Museums India.


I have the pleasure to welcome Mr Pramod Kumar Jain, Joint Secretary, Ministry of Culture, Government of India who is here for the signing of the Addendum.
The Memorandum of Understanding itself was signed during the visit of the Prime Minister to Indian in February 2012 to establish collaboration for the setting up of a Planetarium and extension of galleries at the Rajiv Gandhi Science centre.  The Government of India, which through the National Council of Science Museums has provided exhibits for five galleries, the outdoor science park, a Mobile Science Exhibition and an inflatable planetarium.  The Government of Mauritius provided funds for construction of the centre.


Today, we are signing an addendum to provide for the change of the site of the planetarium, which will now be located at Pamplemousses on the land allocated for the university campus.  I wish to mention here that the Rajiv Gandhi Science centre has become an active stakeholder in the promotion of science and technology and arousing the interest of students to the importance of science.
It has been organising activities throughout the year and reaching out to more than 50,000 people, mainly students, through its National Science weeks, the sky observation programmes, the science fun and science on the move activities, and the Caravane de la science.


The construction of a planetarium will bring an additional asset to the centre and  be useful to introducing people to the world of astronomy and offering non formal education and awareness on astronomy.


Science and technology are critical not only for the economic growth but also to address challenges of water security, food security, sustainable development and health problems. The Rajiv Gandhi Science centre has therefore a vital role to play in popularising science and making children aware of the importance of science education.


Allow me to express our sincere thanks to the Government of India for the support to this centre and other education projects in Mauritius.  One month ago,  we had the immense pleasure to launch the IIT Research Academy, which is a collaborative venture with the IIT Delhi. This is a project with a great future as IIT is an iconic model science education of high standard with world reputation.


Once again, we greatly appreciate the commitment of the Government of India to support education in Mauritius and to help us in promoting science and technology.


I thank you for your attention.
Posted by Rajesh Jeetah at 3:09 PM No comments: Links to this post