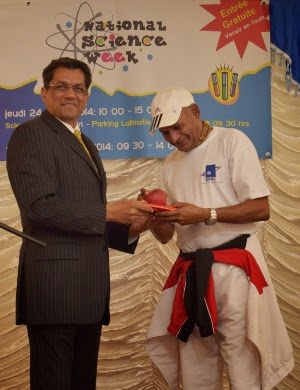 The Context
Speech - Launching of the National Science Week at
Manilal Doctor SSS, Lallmatie on Thursday 24 July,  2014 at 10.30 hrs

Good morning and thank you for inviting me to today’s event.  I am happy to be here on the occasion of the launching of the National Science Week.  Just to recall the first one was held at Rose Belle in 2013, and we had a series of around 10 last year and this year we are keeping this activity still on because of its huge success.

Science is such a universal subject that we cannot do away with it.  The country needs the critical mass of professionals with the scientific background in order to meet the future socio economic challenges.

The Rajiv Gandhi Science Centre (RGSC) has the mandate to promote Science and Technology among the general public and also among school students.  In this context the RGSC have been organising various programmes like the Sky Observation programme for general public, Science Through Colours, Science Project based competition for school students, all these activities have a common goal that is popularisation of Science.

Each of these activities has been tailor-made to attain certain clear specific goals. For example:

And today we are here with the National Science Week.

Science popularisation, ladies and gentlemen, is not only for scientifically literate public or for students who study science at schools but also for those not opting for science as a career. A basic knowledge of science is essential for better understanding the functioning of our own body, for being aware about proper nutrition as regards to health, to understand abrupt climatic changes etc.

It is precisely in this particular context, and also following a Cabinet decision that RGSC has come up with the National Science Week.

A series of interactive and eye catching science demonstrations has also been scheduled to explain science concepts and their applications in daily life, in a fun manner.  During the show audience involvement, observation and critical thinking is encouraged.

I am given to understand also that a series of sensitising talks by various stakeholders has also been scheduled during this two days programme.

By pulling all these resources together we wish to attain the following objectives:

a)    communicate Science and Technology in the community;
b)    promote public understanding of science issues and
c)     supplement the school curriculum in a non-formal, interactive and fun way.

I am glad to note that we have had the contribution and the support of Ministry of Environment and Sustainable Development, Ministry of Agro Industry and Food Security, Mauritius, Blood Donors Association, Mauritius Research Council, Open University of Mauritius, Traffic Branch, Fire Services, MFDC, Université des Mascareignes  etc.

The reason why I am taking the example of this wonderful lady today, is to pass on the message that girls should not shy away from science or technical subjects as shown by various survey’s here in Mauritius.

Louise Blanchard Bethune (July 21, 1856 – December 18, 1913) was the first American woman known to have worked as a professional architect.

Bethune was elected a member of the Western Association of Architects (WAA) in 1885. She later served a term as a vice president of the W.A.A. She was named the first female associate of the American Institute of Architects (A.I.A.) in 1888 and in 1889, she became a fellow of the institute.
Bethune designed mostly industrial and public buildings.  She is especially known for designing public schools. Sadly, much of her work has since been demolished.

Her best-known design and masterpiece is the neoclassical Hotel Lafayette, which was commissioned for $1 million and completed in 1904. It has since undergone a $35 million restoration.

To end I have no doubt that you will all benefit from the exhibition and the sensitisation talks and take the message ahead in your neighbourhood so that we ultimately end up with an increased awareness and understanding among the whole community on the important role that Science and Technology plays in our life and hence aiming at a scientifically literate country.

Thank you for your kind attention!

Posted by Rajesh Jeetah at 4:26 PM No comments: Links to this post