'Knowledge is the right answer. Intelligence is asking the right question'

Posted by Rajesh Jeetah at 4:26 PM No comments: 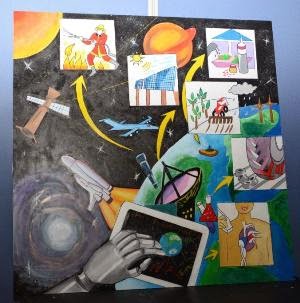 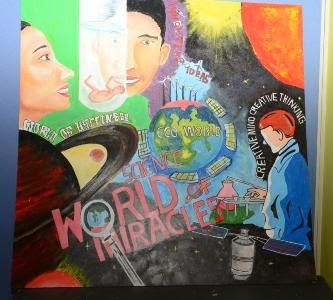 ·        The Director of the Indira Gandhi Centre for Indian culture

Good afternoon. It is indeed a great pleasure for me to address you today, on the occasion of thePrize Giving Ceremony of the “Science Mural Contest”on the theme “Space Exploration for a Better Tomorrow. I thank the Indira Gandhi Centre for Indian Culture and the Indian High Commission for their collaboration in this event.

I am pleased to learn that the 67 entries were received from secondary schools and 221 students registered for this activity.

All the students who participated in the competition must by now have a better awareness of the importance of space science. Space science has led to many innovations which have changed our life. It has contributed to medical science, cell communication, video enhancing and analysis systems, solar technology, chemical detection, digital image processing to name a few examples.

Every day, space exploration missions fulfill people's curiosity, producing fresh data about the solar system that brings us closer to answering profound questions that have been asked for millennia: What is the nature of the Universe? Is the destiny of humankind bound to Earth? Are we and our planet unique? Is there life elsewhere in the Universe?
The theme “Space Exploration for a Better Tomorrow” for this Science Mural Contest also commemorates the Indo-Mauritian Collaboration in the field of Science and Technology. As you must all know, India has made lots of progress in the field of space exploration in the recent years. On November 5, 2013, the Indian Space Research Organization (ISRO) launched a rocket that is projected to reach Mars in September 2014. The object of the mission, called the Mars Orbiter Mission (MOM), is to use a satellite to identify the geological source of methane that is present in the Martian atmosphere.

The Government of India has supported the setting up of this centre and I am pleased to note that it is continuing to give its support and guidance for -
·        the construction of a 120-seater planetarium at Pamplemousses,
·        the extension of this building by 1000 sq m to accommodate 2 more galleries including one on Ocean Sciences, and also the refurbishment of the existing galleries.The planetarium will allow people to benefit from Astronomy.

I have also to inform you that Mauritius is participating in the Square Kilometer Array (SKA) project, together with 8 other countries. This project is about the construction of the most powerful telescope, which will be located in South Africa with antennas in neighboring countries. This project requires skilled professionals in astrophysics and related fields. We are also working with the Mauritius Radio Telescope to establish a Centre for Space Science at Reduit.

Mural  Art
Coming to today’s event, I would like to highlight that Mural Art is one of the best of all known public art. The purpose of murals varies from culture to culture and from time period to time period.
Murals are large scale paintings which are applied directly to walls, ceilings, and many other large flat surfaces. They are presumed to be the oldest human art form, as cave paintings at numerous ancient human settlements suggest, and can be found all over the world.

This initiative of the RGSC to use Mural art as a new means of popularizing science and technology is indeed commendable.

I was really amazed to see some of the murals created by students. This competition opened to the students of Lower Secondary i.e Form I-IIIhad as main objective toencouragecreativity and innovation among young people and carry out basic research work in the field of science and technology.

I would like to congratulate all the rectors, teachers and parents who have encouraged their children to participate in this contest. I would like to thank all the staff of the Rajiv Gandhi Science Centre, the Indira Gandhi Centre for Indian Culture and the High Indian High Commission who has contributed into making the Science Mural Contest 2014 a real success.A special thanks goes also to all the Jury Members.

Although this is a competition, please note that even if you are not rewarded today, your participation in this event is an indication of your courage and inner potential.

Thank you.
Posted by Rajesh Jeetah at 10:06 AM No comments: