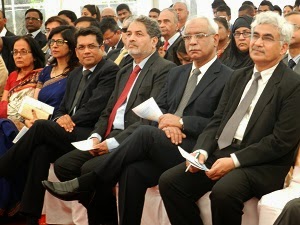 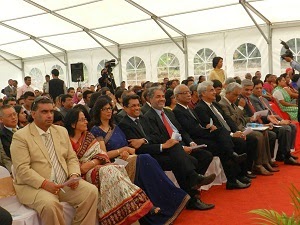 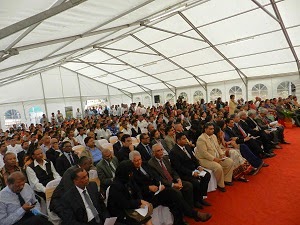 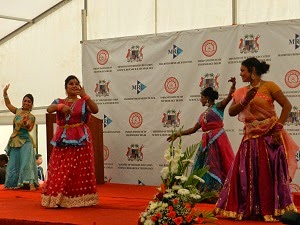 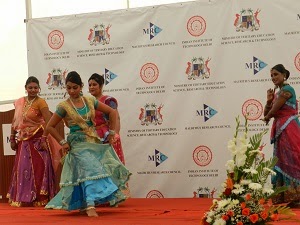 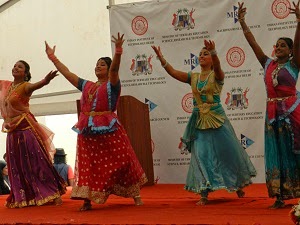 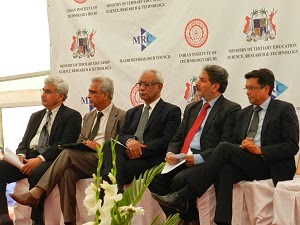 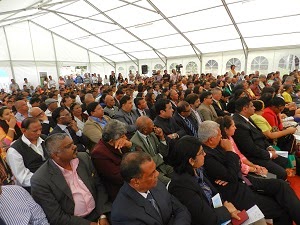 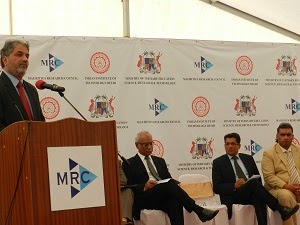 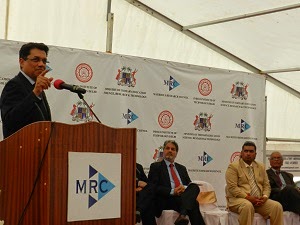 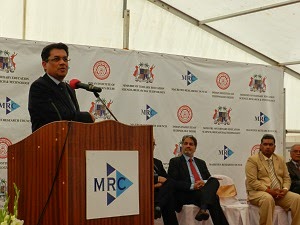 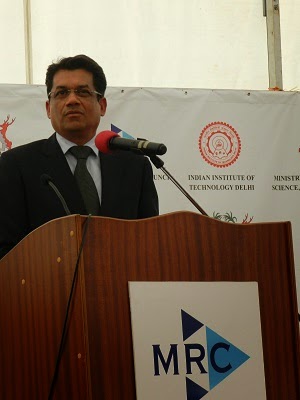 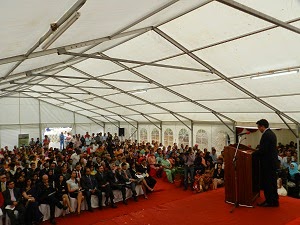 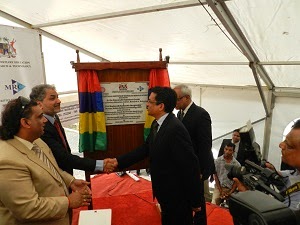 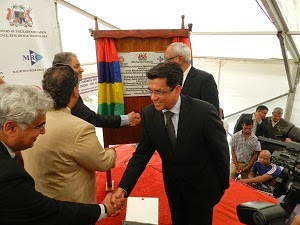 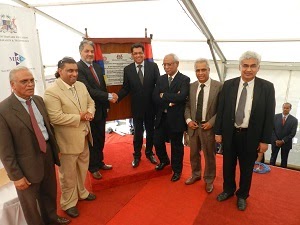 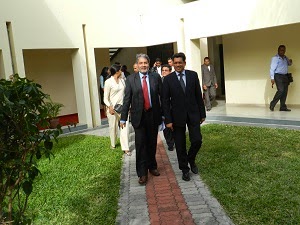 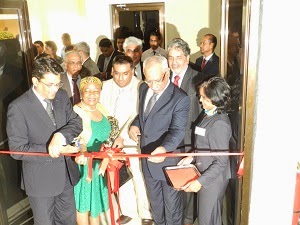 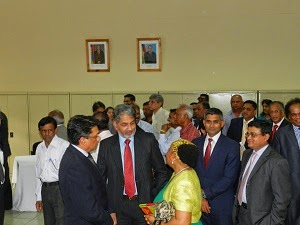 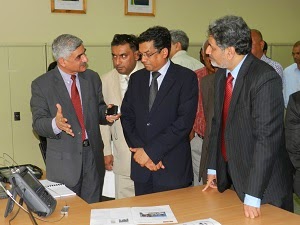 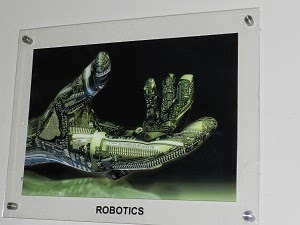 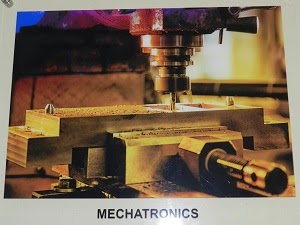 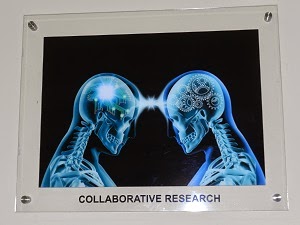 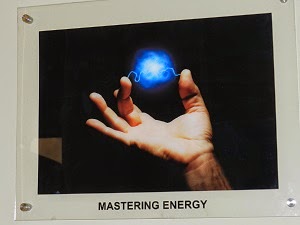 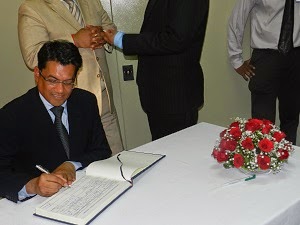 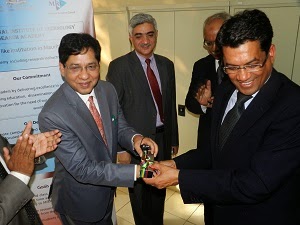 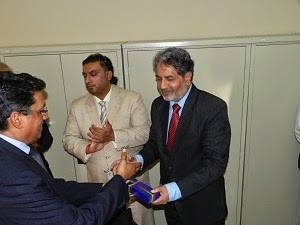 Hon Seetaram, Minister of Business Enterprise and Cooperatives,
Prof Shevgaonkar, Director of IIT Delhi,
The Chairperson of the District Council,
His Excellency, the High Commissioner of India,
Members of the Diplomatic Corps,
Prof Koul from IIT Delhi,
Prof Ishtiaque, Executive Director of the IIT Research Academy
The Chairman and Director of Mauritius Research Council,
The Vice Chancellor and Directors of public universities,
Distinguished guests,

It is my great pleasure to welcome you today at the launching of the International Institute of Technology Research Academy.

The idea of setting up an institution of higher education based on the IIT model in Mauritius has been inspired by none other than the Prime Minister, Dr Navin Ramgoolam under whose leadership, the country is taking a great leap to modernity. He has undertaken to transform our country into a wireless nation, to have a high level of ICT literacy and a large panel of ICT professionals. In 2006, he initiated an accelerated and intense training on a massive scale to create a computer literate population.

It is in this context, that during my visit to India in 2011, I took the opportunity to discuss about the possibility of setting up an IIT like institution in Mauritius and was very pleased with the positive response from the Indian authorities. In February 2012, a five member high level delegation led by Professor Balakrishnan from the Indian Institute of Technology Delhi came to Mauritius to

consider the feasibility of the project.  The feasibility report recommended a two phased approach for the establishment of an IIT, with a first phase of  five years, consisting of building a core research facility, including research infrastructure and capacity.  At the end of the fifth year, six clusters will be implemented, with a total of 30 faculty members and some 50 research scholars.

After very intensive and sustained discussions on the implementation aspects with the Director of IIT Delhi and his team, in August 2013, the approval of Government was obtained and on 19 November 2013, a Memorandum of Understanding for the setting up of the IIT like institution in Mauritius was signed with the IIT Delhi.

The total investment for the project over five years would amount to over Rs 1 Billion, including provision of Rs 228M over five years, the cost of infrastructure at Bel Air and the construction of a new campus at Montagne Blanche, which will accommodate the IIT eventually. Of course, the invaluable contribution of the IIT professors and the transfer of knowledge through them are not quantifiable in monetary terms.

The process has been long and quite challenging because the IIT Research Academy is a pioneering initiative both for us in Mauritius and for the IIT Delhi. This is the first time that such a project is being implemented outside India.

But I am glad that we have now reached the stage of the launching of the IIT Research Academy. This event represents a memorable milestone for the development of science, research and technology in Mauritius- a historical event for the people of Mauritius, specially for the younger generations.

I would like on this occasion to convey our thanks to the Government of India for this new collaborative venture, which will stand as yet another symbol of the special and unique bonds between our two countries.

Allow me to also express our appreciation to the Prof Shevgaonkar and his staff, the Board of Governors of IIT Delhi for their support to this new institution, which should in the next decade become a flagship in this region.

We have here in our midst eminent Professors from IIT Delhi, scientists of international reputation. Let me briefly introduce them.

Prof Shevgaonkar, Director of the IIT Delhi studied at IIT, Kanpur, IIT, Bombay and University of Maryland, USA. He was a Scientist at the Indian Institute of Astrophysics and Raman Research Institute and has been an active researcher in the area of Optical communication, Image processing, Antennas, Microwaves, Radio astronomy etc. He has published more than 150 papers in international journals and conferences, and two books namely Electromagnetic Waves and Transmission lines for Electrical Engineers.

Professor S.M. Ishtiaque, who has been appointed as Executive Director of the IIT Research Academy,  has a long experience in academia and a wide range of research publications.

Prof M.K Khare is the Dean of Alumni affairs and International Programmes and an experienced academic from IIT.

This is equally an opportunity to pay tribute to the founders of the IIT’s. Known as“temples of modernity” and symbols of prestige of Indian education, the IIT’s are closely linked to the nationalist movement in India. Their creation was the outcome of the report of a 22-member committee, set up in 1945 to consider the establishment of institutions modeled on the Massachusetts Institute of Technology (MIT). It is in fact, very symbolic that the first IIT in Kharagpur was set up in a former centre used for detention of political activists.

Today, every Mauritian has every reason to be proud of our partnership with one of the IIT’s  which are ranked as institutions of national importance, have  the President of India as  the ex officio Visitor. Let me also mention that IIT’s count  among its alumnus  people of the caliber of Narayana Muthy founder of Infosys, Vinod Khosla (co-founder, Sun Microsystems),three Senior Vice Presidents at Google, several high level scientists at NASA and  CEO’s of international companies.

IIT’s have their own culture with stringent faculty recruitment procedures, industry collaboration and highly selective student recruitment. Bill Gates has stated “ it's hard to think of anything like IIT anywhere in the world. It is a very unique institution. It is harder to get into an IIT than into Harvard or the Massachusetts Institute of Technology”.

This solid collaborative foundation with one of the most prestigious institutes of technology in the world is expected to further boost science, technology and innovative thinking and to gear the country towards becoming a knowledge and service provider of excellence.

The IITResearch Academy will be a research based institution where key concepts of the IIT ethos of education will be transmitted, including the renowned IIT culture.  It will introduce a new research culture, create more orPhD’s with high level of scientific achievement.

The call for applications will be launched in August. There will be a marketing strategy to give the opportunity to African students also to enroll at the academy. I have to underline that the recruitment of faculty members, the enrolment of students and the award of qualifications will be made by the IIT Delhi and that the same stringent procedures will be followed. The project will be implemented under the strict guidance of IIT Delhi which will provide academic leadership and support.

I have also to mention that the first five years will be guided by the IIT Delhi faculty staff to enable the institution to have sufficient number of high level faculty members and to be equipped with modern laboratories with the latest technologies.  At the sixth year, it will become a full-fledged IIT and operate on its own with its own legislative framework and awarding powers through an International Institute of Technology Bill .

As I mentioned earlier, bringing   an IIT outside India is a first-time, exceptional event. It is a life time opportunity for the Mauritian students, researchers and scientists. Previous attempts made
in 2005 to develop such collaboration had failed.  We should make every possible effort to ensure the success of this new institution.

I would like to conclude with a statement made by the Prime Minister, in a speech delivered in 2006 – “ The future of Mauritius depends on our ability to innovate, to deliver quality and to deliver it reliably and consistently. My government will make available to the people the technology and infrastructure and the legal regulatory framework that will allow us to become a First World Country. We are embarked on a great adventure, fraught with peril but full of promise. With vision, courage and hard work, we will succeed.“

Thank you.
Posted by Rajesh Jeetah at 8:30 PM No comments: Links to this post